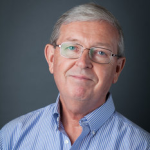 I believe in Climate Change because I’ve seen it changing all my life. In fact, it seems that no two or three years in a row are the same with regards to rain, snow, heat or cold around our area in Elk River, MN.

The biggest climate change event in history happened about 4,500 year ago. It was the world-wide flood often referred to as Noah’s Flood. Of course, Noah didn’t cause the flood, God caused the flood when the ocean floors opened up bringing water up from underground and the sky opened up with rain for 40 days.

Today those who push the Catastrophic Climate Change Fable say that we humans are responsible for the elevated levels of CO2. They believe that this elevated CO2 will cause the earth temperature to soar… up 2-3 degrees Centigrade above the current normal levels. Ocean levels will rise. Crops will burn up in droughts. Life will come to an end. All because we burn fossil fuels.

There was a time when humans were the cause of climate change.

We read about it in the Bible, in the book of Genesis.

The Lord saw how great the wickedness of the human race had become on the earth, and that every inclination of the thoughts of the human heart was only evil all the time. The Lord regretted that he had made human beings on the earth, and his heart was deeply troubled. So the Lord said, “I will wipe from the face of the earth the human race I have created and with them the animals, the birds and the creatures that move along the ground for I regret that I have made them.” But Noah found favor in the eyes of the Lord. Genesis 6:5-8

But as we know, God saved Noah and his family, a total of eight people who the Lord used to repopulate the earth along with the animals and birds that were saved from the flood on the Ark, the boat that God gave instructions to Noah to build.

I do NOT believe that humans are causing the climate of the earth to change. Yes, we do contribute to the pollution of air and water when we don’t take care of the earth like God told us to. There are many ways we can do a better job of caring for the earth but, stopping the burning of all fossil fuels such as coal, oil, gas and gasoline is not the answer. Millions of people today have a better and healthier life because of the power sources that have been developed.

If you are interested in looking into this issue further I have a website called Climate Change Truth where I post my own thoughts and curate content from others whose writings and research don’t make the main news outlets. You can read the articles at: https://climatechange-truth.com/

As a Digital Online Consultant, I serve entrepreneurs who lead ministries, churches. non-profit organizations or local businesses. I build WordPress websites and provide consulting services. I do volunteer work in many areas including donating my time and resources to build websites for non-profit organizations. If you would like to Pay-It-Forward to help me, click on the Support My Work menu button.

Urgent: The Most Unpleasant Article You’ll Ever Read

Creation in the 21st Century

WITH VAERS AT HHS

COVID-19 Opened the Door to Transhumanism

Responding to: Not vaccinated yet? Why not?

Are we seeing a mass casualty event?

This website uses cookies to improve your experience while you navigate through the website. Out of these cookies, the cookies that are categorized as necessary are stored on your browser as they are essential for the working of basic functionalities of the website. We also use third-party cookies that help us analyze and understand how you use this website. These cookies will be stored in your browser only with your consent. You also have the option to opt-out of these cookies. But opting out of some of these cookies may have an effect on your browsing experience.
Necessary Always Enabled
Necessary cookies are absolutely essential for the website to function properly. This category only includes cookies that ensures basic functionalities and security features of the website. These cookies do not store any personal information.
Non-necessary
Any cookies that may not be particularly necessary for the website to function and is used specifically to collect user personal data via analytics, ads, other embedded contents are termed as non-necessary cookies. It is mandatory to procure user consent prior to running these cookies on your website.
SAVE & ACCEPT

The form collects name and email so that we can add you to our newsletter list and to blog updates. Checkout our privacy policy for the full story on how we protect and manage your submitted data!